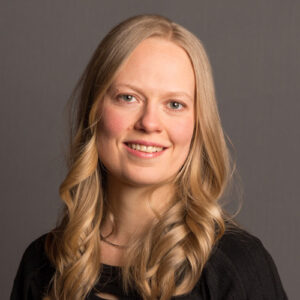 Kiiri has a love of all things vocal, from Eddie Cantor to Ella Fitzgerald, from Bach to Broadway. After playing (piano, violin, saxophone, trombone) and singing music in various styles while growing up, her choice to follow a professional path as a singer enabled her to combine her two great loves – music and language – in a varied and gratifying career. Kiiri’s higher-level classical training in both piano and voice resulted in a B.Mus. (Piano/Voice) and M.Mus. (Vocal Performance), as well as opportunities to study with several of Canada’s leading singers and pedagogues, including Jan Simons, Cathérine Sévigny, Benjamin Butterfield, and Nancy Argenta.

A performer, voice teacher, and diction coach, Kiiri is a versatile musician. Her ability to guide others in honing their vocal skills and achieving high-level language/dialect proficiency have led her to be sought after as a teacher/coach to vocal performers, conductors, choirs, and speakers in more than 10 languages and various dialects.

A teacher for 20 + years, Kiiri is passionate about the discovery of each singer’s unique sound as the foundation for expressive and multi-faceted vocal training. Her approach focuses on the development of healthy technique through the elimination of physical tension patterns and emotional/mental blocks, while encouraging each singer’s discovery, awareness, and enjoyment of the physicality of singing and resonance. In addition to teaching at CCPA, Kiiri is on faculty at the Victoria Conservatory of Music as voice and lyric diction instructor for both post-secondary and community students. She has also been diction coach for productions by the VCM’s opera training program, Opera Studio.

As a mezzo-soprano, Kiiri’s classical performances range from Early Music to the contemporary. Her fondness for lighter repertoire and non-classical styles means she can also be found happily performing repertoire such as French chansons, the American Songbook catalogue, and Broadway.