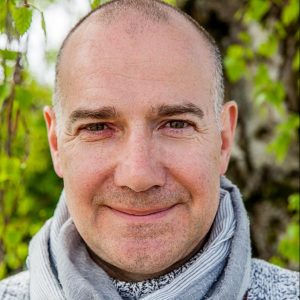 Jeffrey Renn is an actor, director, teacher, clown, and storyteller. He is an alumnus of the London Academy of Music and Dramatic Arts, where he studied acting, and has an MFA in Directing from the University of Victoria. Jeffrey was a member of the acting ensembles at the Shaw and Stratford Festivals and has also appeared on Broadway in Moliere’s The Miser and Shakespeare’s Much Ado About Nothing. An acclaimed director and acting teacher, Jeffrey has given workshops or been a sessional instructor at the following post secondary institutions: the Canadian College of the Performing Arts, Douglas College, the University of Victoria, the University of British Columbia, the Gastown Actors Studio, George Brown College, the University of Winnipeg in Canada and in Australia at the Queensland University of Technology, Bond University, and the Lismore School of the Arts.

He was honoured to be the interim Artistic Director of Realwheels; a Vancouverbased, professional theatre company that produces performances that deepen the audience’s understanding of the disability experience and continued this work with Kickstart Disability Arts Organization. At present he resides on Salt Spring Island mentoring and building exitStageLeft’s and Graffitti Theatre’s SOSSI Festival. Look for his one-man show, At Your Service – The Life and Yarns of Robert Service.