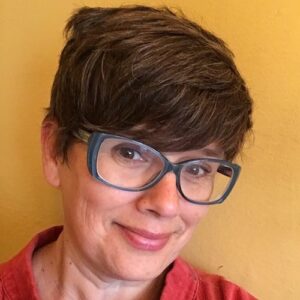 Janet Munsil is the author of over a dozen plays, including That Elusive Spark (Finalist, Governor General’s Literary Awards), Ugly Duchess, Smoking with Lulu, Circus Fire, Be Still, and a 2012 adaptation of Jane Austen’s Pride and Prejudice, which has had more than sixty productions worldwide.  Her plays have been produced by Canada’s National Arts Centre, Theatre Calgary, Persephone, The Arts Club, Touchstone Theatre, Alberta Theatre Projects, The Tarragon, Soho Theatre (London UK), Prague Fringe, and West Yorkshire Playhouse (Leeds) among others. Her play for Realwheels Theatre, Act of Faith, premiered in April 2019 at The Cultch in Vancouver. She has been a member of the Banff Centre Playwrights Lab, and the Stratford Festival Playwrights Retreat. In 2016-17, she was an Artist-in-Residence at the Centre for Studies in Religion and Society at UVic. Munsil completed a BFA in theatre at UVic with a directing and design specialty.  Recent directing projects include Girl in the Goldfish Bowl at Langham Court Theatre, Born Yesterday for Blue Bridge Repertory Theatre, and Twelfth Night and Love’s Labour’s Lost for the Greater Victoria Shakespeare Festival. In 2016, she stepped down as Artistic Director and Producer at Intrepid Theatre after 25 years, to complete an MFA in Writing.