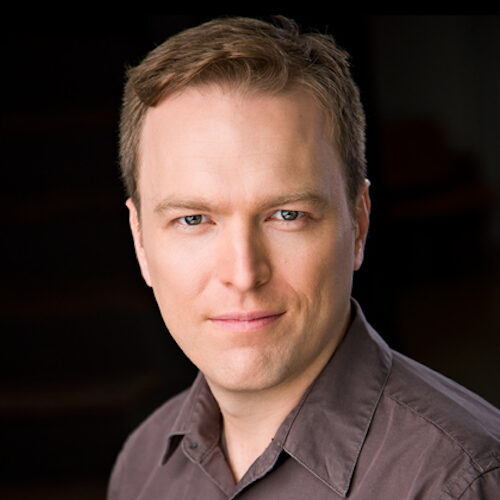 Chair of Acting
Acting and Text

Evan is grateful for the opportunity to live and work on the traditional lands of the Lək̓ʷəŋən People, also known as the Esquimalt and Songhees Nations. He is an educator, actor, director and founding Artistic Director of Bleeding Heart Theatre, an award winning not-for-profit based in Vancouver. Bleeding Heart has produced five mainstage productions and three workshop productions, most recently the World Premiere of The Fighting Season by Sean Harris Oliver at the Vancouver East Cultural Centre. Directing credits include The Lonesome West and The Amish Project for Pacific Theatre, and The Foreigner for the Arts Club. Recent projects include Being Here and A Christmas Carol with the Belfry.

Last seen on stage in The Explanation with the Frank Theatre, he has acted with many companies including Horseshoes & Hand Grenades, Touchstone Theatre, Blackbird Theatre, and the Chemainus Theatre Festival. He has worked on numerous Voice Over/Animation projects, and over two dozen film and television productions as an actor, including roles on Arrow, DC’s Legends of Tomorrow, iZombie, the miniseries When We Rise, Supernatural, Stargate SG-1 and others. Evan has written two plays, Bloodlines and Alpha, and is currently working on a new play as a member of The Belfry’s New Incubator Project.

Nominated for multiple Jessies(Vancouver Theatre Awards) for his work as an actor and director, Evan is a recipient of the Sam Payne Award, and holds a BFA in Acting, an MFA in Directing and a Bachelor of Education from the University of British Columbia.