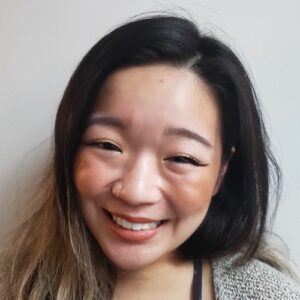 Jaeyoung Park is a Korean-Canadian artist based in Edmonton, Alberta. She graduated from the Canadian College of Performing Arts in 2019. She is currently studying at the University of Alberta in hopes to achieve her Bachelor of Elementary Education.

JJ first fell in love in musicals after watching Audra McDonald in Disney’s television production of Annie, watching the production till she knew every single lyric to each song. She then continued to sing in choirs and perform in school productions of In the Heights, The Addams Family, and Rent (Scona Theatre Co). Since then, she continued to pursue her passion at CCPA as the “Librarian” in Middletown.

She is very hopeful that through the cultural safety group, important issues can be discussed and dissected in a safe environment so that current and future students can work and learn in the utmost inclusive and safe environment.

She would finally like to thank her friends and peer’s who have supported her throughout the years as she has embarked on this journey, but especially to her parents and older brother who have endured her screaming “The Sun Will Come Out Tomorrow” at all times of the days for years, but have never once told her to be quiet.