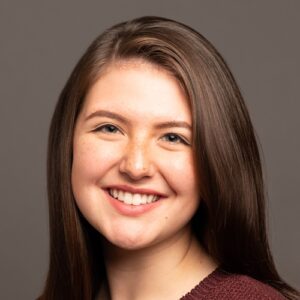 Jacelyn Perret is a Métis theatre artist from Treaty 6 territory and the homeland of the Métis in Saskatchewan. She graduated the College’s diploma program in the spring of 2020.

Jacelyn is no stranger to the stage; her first taste of stardom was playing the Tin Man in a self-produced version of The Wizard of Oz in the third grade. Since then, Jacelyn has appeared in featured roles in numerous productions including “Elvira” in Blithe Spirit (Upstage Productions), “Jill/Juliet” in Goodnight Desdemona, Good Morning Juliet (CCPA), “Ali” in Mamma Mia! (Broadway North Theatre Company) and as “Young Siward” in Macbeth (Spark Theatre).

Matched with Jacelyn’s love for the arts is her passion for her culture. In 2019 Jacelyn wrote her first one act play, titled Invisible Minority. The play is both a personal exploration of the importance of cultural identity in today’s generation, and a retelling of the North West Resistance of 1885 through the eyes of the women that experienced it. Invisible Minority won the 2020 Fowler Family Award for Playwriting. It was set to debut as part of the TD Festival of New Works in March of 2020. With her newfound zest for playwriting and Indigenous theatre, Jacelyn plans to write more plays that feature the representation she didn’t see growing up.

Jacelyn would like to deeply thank all of her friends, family, and mentors for supporting her passions over all these years. Maarsii.